Dragon-boat rowing has become one of the most popular and accessible types of participant sports and active recreation in Vladivostok.

The first of the ten-person boats appeared in the capital of Primorye in 2003, but over the years rowing enthusiasts have formed sporting communities in several cities of the region. The teams from Vladivostok, Partizanska and Nakhodka are traditional rivals for the past several years at the regional competitions. Currently, several thousand people have firsthand experience with the dragon-boats in Primorye.

All it takes to become part of an amateur team of rowers is the strong desire, and this becomes the key to regular, good faith workouts. Often canoeists, retired from so-called elite sports, are transplanted into the dragon-boats for various reasons. The judges take into account the different levels of training of the teams in the competition and form different classes of races. Typically, mens, womens, mixed, and junior teams participate in major events. There are separate races for class “A” — experienced rowers and “B” — beginners. However, observation shows that newcomers quickly join the community of enthusiastic rowers, and a young team may well compete on a level with veterans for a medal.

In the summer the rowers train on the open water, mostly in the evenings, enjoying the sunsets over the Amur Bay, and breathing in the fresh sea air. According Andrey Khomenko, director of the International Rowing Center, this is the best way to relieve stress after a busy day. Competitions are held on weekends. Vladivostok, and also Nakhodka, are happy with the dragon-boat races. The opening and closing of the rowing season is traditionally held on the lake in the village of Lozovo, where the water is always warm, and the nearby children’s camp Kostyor is ready to shelter and feed the athletes and fans. 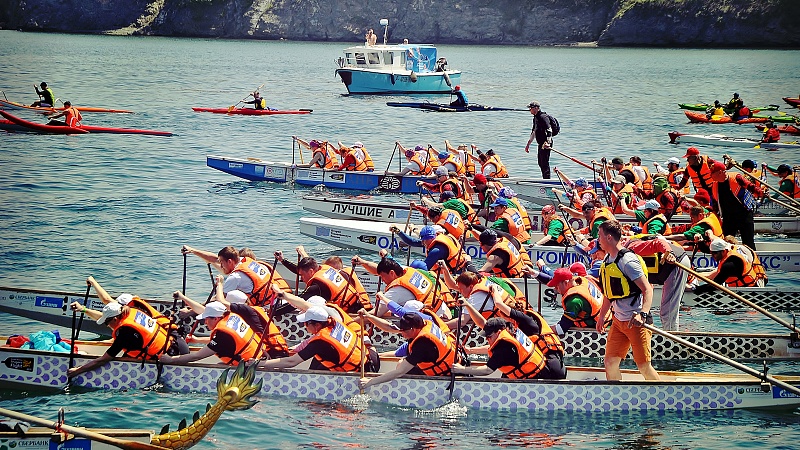 The easiest way to join the community of rowers is in June, when the city holds amateur races for Youth Day. Many citizens step aboard a boat for the first time in order to defend the honor of their organization, become drawn to the sport, and remain participants.

Coaches constantly come up with new ideas, keeping the attention of their rowers. When four or five boats from the Seven Feet Yacht Club are in the water simultaneously with the rowers, teams can chase each other just “for fun” to assess their level of preparation. Boat trips have become a weekend tradition: to Okeansky station on Lotus Lake or to Kovrizhka (gingerbread) Island. When two giant bridges were built in Vladivostok, in honor of this event Andrey Khomenko organized Bridges, a 14-kilometer race from the Far Eastern Federal University campus to the Seven Feet Yacht Club. In the summer of 2014, rowers embarked on a multi-day trip to southern Primorye’s marine preservation, rowing a path of 130 kilometers.

Plov has long been the rowers’ favorite dish and is prepared according to tradition in a huge cauldron with garlic and barberry. Every sports festival ends with refreshments, which are prepared near the competition site. 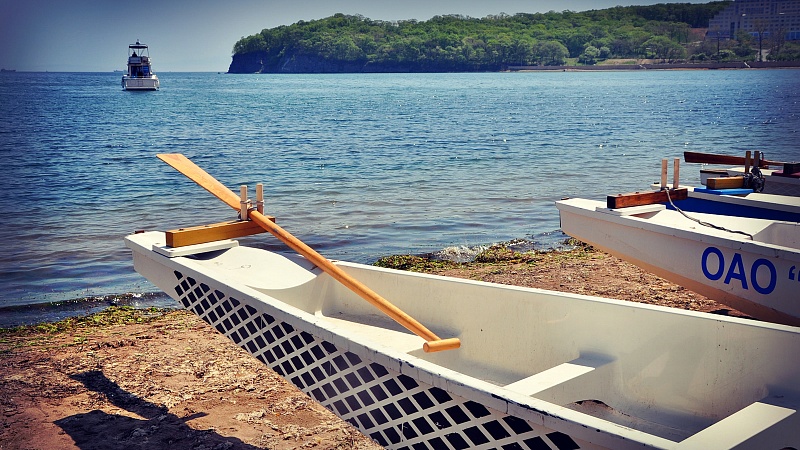 When the open water season ends, the rowers move their training to indoor gyms, where a special machine simulates rowing. The machines are equipped with a digital display that shows the output of each muscular effort and the time spent by the rower for a particular distance. By improving their performance with the help of smart machines, the rowers wait for the new season.